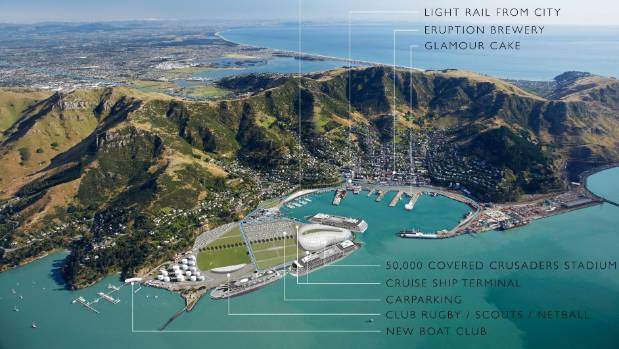 Forget central Christchurch. An architect has come up with an "optimistic" alternative stadium location: Lyttelton Port.

Michael O'Sullivan, of Bull O'Sullivan Architecture, said the harbour's "dramatic and empowering" landscape was fitting for a multi-purpose stadium.

He has not submitted the design to the Christchurch City Council nor Minister supporting Greater Christchurch Regeneration Nicky Wagner, rather he hoped it would start a discussion to think outside of "mediocrity". 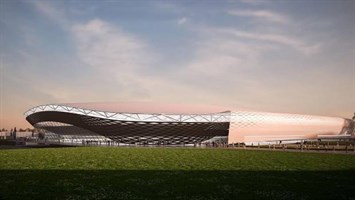 Christchurch's proposed multi-use arena in the CBD could have a steel roof and a retractable turf.

A pre-feasibility study released last week by the Christchurch Stadium Trust recommended a $496m multi-use arena, with 25,000 permanent seats, a full roof and a retractable playing field. It saw little opportunity for private funding for the project.

The Crown is acquiring the land, between Madras, Barbadoes, Tuam and Lichfield streets. The Christchurch City Council will contribute $253m and the National Party has pledged $120m in additional funding if it remains in power, leaving a $123m shortfall for the preferred option.

Wagner has not ruled out the idea of a special regional rate to help pay for the stadium, but said nobody wanted it to cost the people of Christchurch more.

O'Sullivan, 48, who divides his time between Auckland and his Lyttelton studio, said the stadium should be big enough to accommodate a growing city. He suggested one seating 55,000 people.

t could double as a cruise ship terminal, he said. The stadium should be used for music, drama and sport.

Light rail could transport people between the stadium and the city. The idea would fit in with the Lyttelton Port Company's marina and waterfront promenade plans.

O'Sullivan said the west side of Lyttelton port was "the best spot possible in the Canterbury region ... the energy is there. It's completely under-utilised."

He said people might think he was "nuts", but if one million people said yes, it could happen.

People needed to be" bold with decisions" rather than "go with the default ... precinct plan Christchurch has relied on and hasn't come to fruition".

"It might not ever happen, but if we don't consider it, we'll be railroaded into mediocrity."