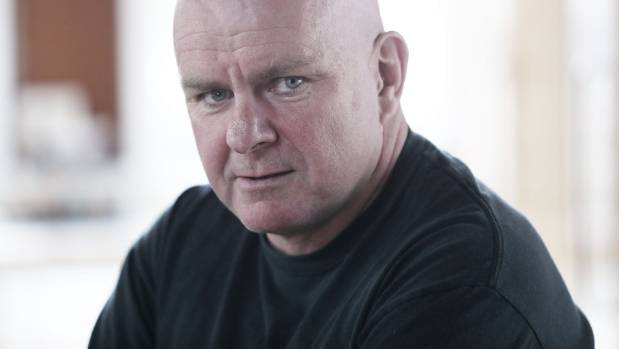 Michael O'Sullivan seems to have an iron clad grip on the New Zealand Architect Awards: but it's not just his building design that is famed for its technical superiority.

The co-owner of renowned architecture firm Bull O'Sullivan cemented his reputation as one of the country's top architects when his firm won two awards at the annual ceremony on Friday night.

O'Sullivan was also a keen amateur wrestler in his heyday, pulling off takedowns and reversals with the same alacrity he showed to building beautifully-designed homes. 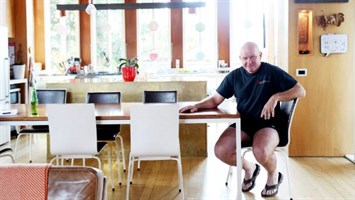 Michael O'Sullivan in the home he personally designed and built 10 years ago in Mangere Bridge. Photo by David White/Stuff

Both pursuits feature prominently in the O'Sullivan family history.

O'Sullivan's grandfather, Jack Aspin, was the 1938 Auckland middleweight wrestling champion, while his uncle David Aspin, was one of only two New Zealanders to have ever been the flag-bearer at two Olympic Games, at the 1972 and 1976 Summer Olympics, and won gold at the 1972 Commonwealth Games in the 1982 freestyle wrestling category.

Another uncle John Aspin, who passed away this week, was also a prominent wrestler, and O'Sullivan has dedicated his latest awards to his uncle.

O'Sullivan, 48, wrestled competitively into his forties, taking out the Auckland 120kg category competition in 2013.

And now the baton has passed to his 10-year-old son Seamus, who has won age-group national wrestling titles while his daughter, Mary, eight, was placed third against boys in this year's Auckland championship. 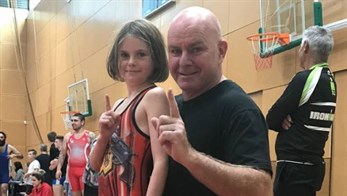 Architect Michael O'Sullivan and his daughter, Mary, who won 3rd place at an Auckland wrestling championship against boys.

It was on his father's side that he developed a keen interest in building and architecture.

O'Sullivan's father was an Irish immigrant who came over to New Zealand before the start of World War II.

He says his father, who was a carpenter and bridge builder, refused to fight for the British Empire like most Irishmen at the time, but ended up building embattlement bunkers in North Head, Devonport.

He later married a woman twenty years his junior and raised eight children in Otahuhu before moving onto various civil projects such as building state houses in Lower Hutt.

O'Sullivan says he and his siblings were privileged to have been able to work alongside their dad "and enjoy all the madness".

This cemented his love for building things and set him on a path to become a celebrated architect. 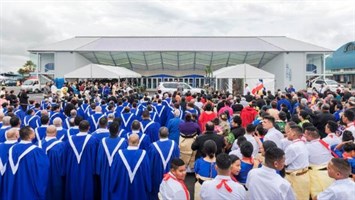 Michael O'Sullivan designed the Lesieli Tonga Auditorium for which he won a 2017 New Zealand Architecture Award.

He laughs as he recalls the first house he designed when he was sixteen-years-old. He says his sister phoned him out of the blue and asked if he can draw a house for them.

"I said well I only just started this drafting certificate but we'll give it a go. So it's kind of nuts. You look back at it and kind of go mmm, but they loved it and they're still there," he says.

The house, which is located in Westport, "sits in the bush" according to O'Sullivan and the "sun works through it beautifully".

He says you need to be able to interpret the big issues in the land architecturally if you want to be thoughtful about the project at hand and points to the work of the Maori who he believes has the most sophisticated understanding of space on the planet. 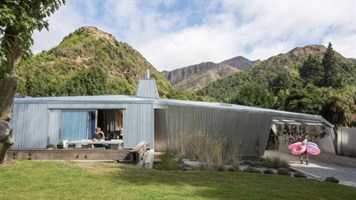 Architect Michael O'Sullivan has won two New Zealand Architecture Awards for 2017. One of them is for this house, which he designed, in Arrowtown.

There's the family home he built in Mangere Bridge, and his "architect monastery" studio in Lyttleton, which he travels to every week.

Both received national accolades in the past few years.

He salvaged discarded wharf beams from the Lyttleton Port that was damaged during the 2011 earthquake and used it to make a protective wall at the back of the studio. This also protects the building, that sits halfway up a hill, from the rocks that are still tumbling down the slope.

He admits there are no long-term solutions to protect buildings from earthquakes. All you can do as an architect according to O'Sullivan is be as "generous" as you can with the bracing because the more walls and bracing you can commit to an object, the more likely it's going to survive.

O'Sullivan is, however, a realist and jokingly says "if a big earthquake comes through you're f*****".

In 2015, O'Sullivan spent two weeks in Mongolia to present ideas to the government to try and help solve their housing problem. Many Mongolians live as nomads, picking up their belongings and move around every three months. Now many nomads are flocking to the capitol, causing a major housing crisis on a par not dissimilar to Auckland's.

He says he did a frantic amount of research before going there, and came up with a solution to use a tiny alpine flower to generate the floor plan and presented that over the course of five days to the Mongolian government through the use of an interpreter.

"It was a very privileged thing to do," he says.

"They are the most happy, beautiful, free and uninhibited people I've ever come across."

While he was there, O'Sullivan broke down some of the cultural and language barriers by wrestling some of the nomadic herdsman he met.

O'Sullivan, a bald, burly man wearing rugby shorts with a crushing handshake, bagged his first deer during a recent outing to Ngamatea Station near Taupo.

While he talks about his life, American singer Nina Simone's soothing music plays in the background.

O'Sullivan laughs and says it's the first deer he's ever shot and killed while Melissa's busy cutting a chunk of venison meat into medallions for dinner.

You just have to look at all the photos up on the walls of this beautifully designed and spacious house to see that family comes first in the O'Sullivan household.

O'Sullivan's firm Bull O'Sullivan picked up two awards at Friday's New Zealand Architect Awards; the Hospitality Award for the Lesieli Tonga Auditorium in Mangere, an auditorium for the Free Wesleyan Church of Tonga where church groups gather for large ceremonies and feasts of pig and crayfish.

The other was for a small house he designed in Arrowtown.

Among his other recent projects are a new rugby stadium for Christchurch, which he designed off his own bat because he has huge reservations with the stadium that's been proposed.

He wants people to realise that they don't have to abide by a plan that was prepared as a "kneejerk reaction" to the earthquakes and that they should not be railroaded by mediocrity.

O'Sullivan admits that everyone in Christchurch is of course thinking 'who is this bloody idiot?'.

His latest project saw him travelling to Austin, Texas where someone wants him to design a house similar to his Mangere Bridge home on the banks of the Colorado River.

However, the one building in the world that he would have loved to design above all else was built more than a millenium ago in Ireland. In fact, he took his family to the 1200-year-old monastery at Skellig Michael recently.

He says this is where the Irish sent their most acclaimed thinkers, which might be something he is trying to replicate at his Lyttleton studio.