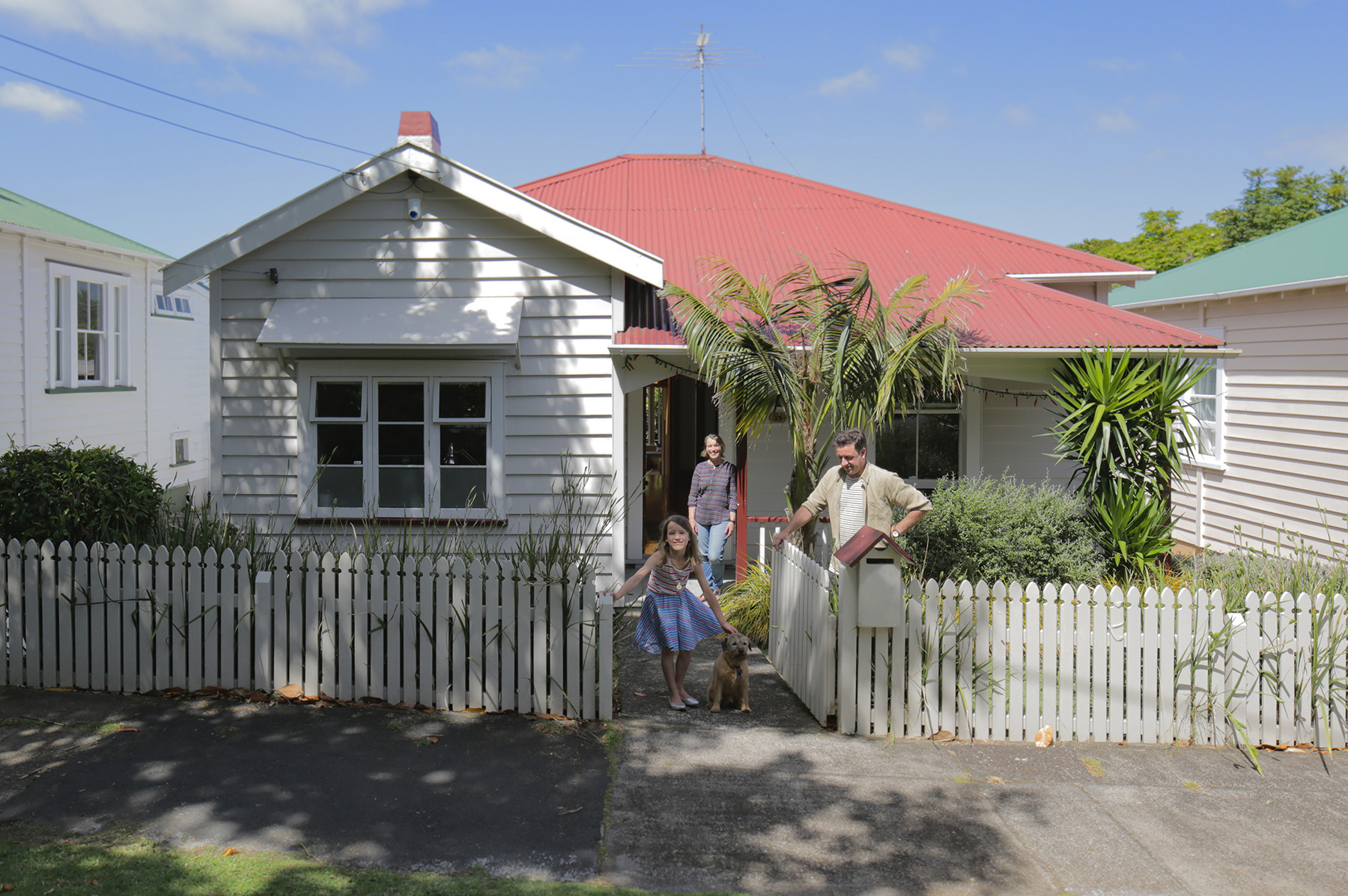 It's what's going on behind the scenes that makes this house special – there's a new, award-winning addition out the back. You just can't see it from the road.

The house, in Onehunga, Auckland, is traditionally known as a workingman's cottage, but architect Michael O'Sullivan of Bull O'Sullivan Architecture calls a "working woman's cottage".

"Everyone has this romantic idea of a workingman's cottage, but when this house was built (early last century) it was the women who did all the work in the home," he says. 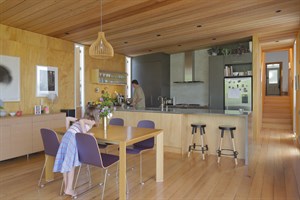 The front door opens to a hall that leads down to the new addition at the rear, where the family living spaces have been relocated. Photo by Sou Muy Ly

O'Sullivan says the laundry was one of the most arduous chores – and that was still the case for the family living here.

AUT design lecturer Dr Janine Randerson, art director Jason Johnston and their young daughter Hazel were going outside to use their laundry, which was within the subframing beneath the house. It even had a dirt floor.

But the laundry wasn't the only problem, says Randerson. "Both the kitchen and the bathroom were in a lean-to at the rear, within a 10 square-metre space. So the utilities were really dysfunctional – you had to walk through the kitchen to get to the bathroom. This was a very necessary renovation." 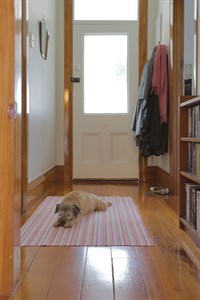 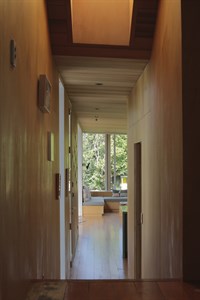 Looking in both directions, up and down the hallway. Photo by Sou Muy Ly

The family commissioned O'Sullivan to design an addition at the rear, which would maximise the garden view and access – the existing house had very little indoor-outoor connection. "There was a 40 square-metre Skyline garage at the back, which took up a lot of valuable space and completely blocked a view of a lovely plum tree," says Randerson. 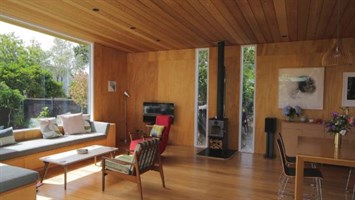 The Fijian kauri plywood walls have been oiled to retain the 'energy' of the timber. Photo by Sou Muy Ly

The architect's approach was to create a new garden pavilion, which would be the "public forum", keeping the front of the cottage for the bedrooms and office space. "The addition was designed to be light and airy, and open to the outdoors, like a breath of fresh air, compared to the awkwardness of the cottage," O'Sullivan says.

"A garden pavilion allows you to engage with the rear yard. Without this connection, the owners would be using the yard like a farmer would use a paddock."

Because the site slopes down from the street, the addition is a few steps lower than the house, as well as hidden from the street. The change of levels enhances the difference between new and old, while a large occular skylight above the stairs ensures the transition zone is flooded with light. 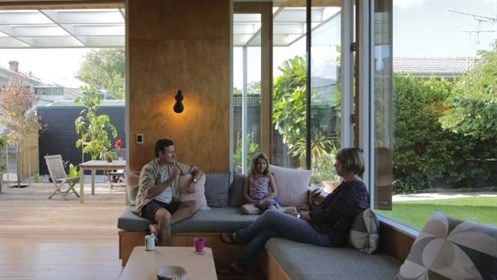 O'Sullivan wrapped the new building in aluminium weatherboards that have a textural anodised coating. "When the sun rolls across the aluminium, the weatherboards shine and glisten as though they are wet."

The interior is lined with timber, including Fijian kauri plywood walls, which have been coated with Danish Woca oil. "This is a lovely, neutral oil that allows the timber to breathe," says the architect. "Polyurethane would not only have smelled, it would have dulled down the energy of the timber."

Solid cedar shutters beside the new kitchen can be opened up for light and ventilation. When closed, they provide privacy from the neighbours. 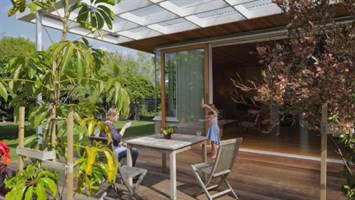 The covered deck functions as another room for the family, who can now enjoy their back garden. Photo by Sou Muy Ly

The architect also introduced a textural glass pattern to key windows, in both the new and older parts of the house. The glass helps to conceal the cars parked in a new space beside the addition.

Opening up the addition at the side, rather than the rear, meant there was space to incorporate a large picture window and a day bed. There is also a woodburning fire against one wall, which helps to warm the entire house.

Randerson says the addition has made "a huge difference" to the family. Not only do they have a new kitchen in the new part of the house, but there is also a new bathroom and laundry in the house. And they can enjoy their garden all year round, with the large deck functioning as an extra room. 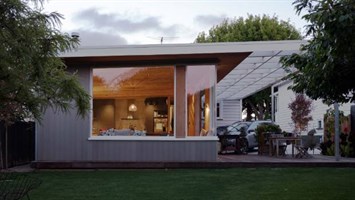 The addition features aluminium weatherboards that have a textural, anodised finish. Photo by Sou Muy Ly

The addition has also met with the approval of industry professionals, winning a 2017 NZIA Auckland Architecture Award.

And the cost? Randerson says the price tag was around $250,000. "But we did make some decisions that made it a little more expensive than it might have been otherwise," she says. 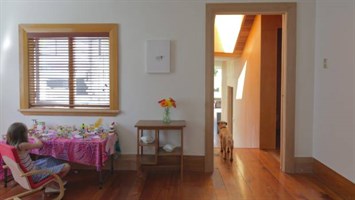 Hazel now has plenty of space to work and play. Photo by Sou Muy Ly